Baseball pitcher throwing mechanics: Can this help to reduce the near “Epidemic” of Tommy John Elbow Injuries in Baseball Players? 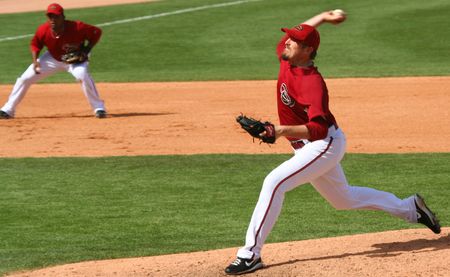 The baseball pitcher is 36 times more likely to developing a shoulder or elbow injury if they throw while the arm or body is tired and fatigued. (American Sports Medicine Institute).  We know that limiting pitches thrown per game, per week and per year can reduce the risk of arm injury. Science has shown that that repetitively throwing hard fast balls increases the potential for arm injury.

Overhand throwing puts a valgus stress on the elbow. Valgus stress is a fancy term to mean that the elbow is bending in an unnatural direction or opening up. The high level stress on the elbow during pitching would cause the forearm (ulna) and the arm (humerus) bones to detach, if it were not for a 2 inch ligament (ulnar collateral ligament/Tommy John Ligament) that holds the elbow together. Unfortunately, this ligament is not a muscle or bone which could be strengthened through training and use. It is theorized that if you throw hard enough and long enough the ligament will eventually tear. As it has been said, “there are only so many bullets in the gun.” Or, “there are only so many throws in an arm.”

In order to reduce this valgus stress on the arm it is essential to have good throwing and pitching mechanics. The stress on the ulnar collateral ligament is greatest as the arm begins to accelerate forward during the throw (late cocking and early acceleration phase of pitching). The stress on the ligament can be reduced by having good body alignment and arm positioning when this position is reached. Often youth and adolescent pitchers have poor mechanics, thus increasing stress on the elbow during the arm acceleration phase of pitching. Science has also shown that in elite baseball pitchers, 85% of throwing velocity comes from: leg drive (push off and stride length); hip and torso rotation (shoulder-hip separation); and shoulder cocking (shoulder angle). This is described in great detail in my book “The Rubber Arm”. Therefore, in elite baseball pitchers the arm only accounts for 15% of the throwing velocity in pitching. However, if a player has poor pitching mechanics, the arm may be utilized to a greater extent. The poor pitching mechanics may also lead to increased valgus stress on the elbow lending to greater strain of the “Tommy John Ligament”.

Because baseball pitching is a difficult skill to learn it is imperative that pitchers spend a great deal of time rehearsing and refining the mechanics. Not only will good pitching mechanics reduce the risk of arm injury but it will also improve baseball performance by increasing velocity and control.

There is not one way to reduce all potential for arm injury, however, the evidence has shown that arm injury can be reduced with: developing sound scientifically-based pitch mechanics; not allowing pitchers to throw with arm or body fatigue; following pitch count rules; throwing the fastball less than 50% of time when pitching; optimizing mobility, flexibility, strength and power of key throwing muscle groups.

Dr. Mishock’s new book has been released, “The Rubber Arm: Using science to increase pitch control, improve velocity and prevent elbow and shoulder Injuries.” This book can be found at train2playsports.com.

This site uses Akismet to reduce spam. Learn how your comment data is processed.